Why Simple Is Still a Hard Sell 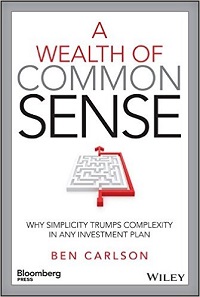 Last January, I overhauled my model portfolios to make them simpler. Some of the older options included small-cap stocks, preferred shares, and real estate investment trusts (REITs), but I switched to recommending a three-ETF portfolio covering only the core asset classes. While many readers welcomed the change, several others criticized the new streamlined portfolios as too simplistic. I still get emails from beginners who want to add more ETFs to my recommended model. Simplicity, it seems, is a hard sell.

In his recent book, A Wealth of Common Sense, asset manager Ben Carlson (who writes an excellent blog with the same title) reveals that he’s made the same discovery: investors resist simplicity. Yet Carlson believes it’s the right solution for most of us. “I’ve spent my entire career working in portfolio management,” he writes. “This experience has taught me that less is always more when making investment decisions. Simplicity trumps complexity. Conventional gives you much better odds than exotic.”

A Wealth of Common Sense is one of the wisest investing books I’ve read in the last several years. Some of its arguments are not particularly novel: for example, he spends a lot of time discussing the familiar obstacles active investors face in their attempts to beat the market. But Carlson also has some refreshing insights to share:

A lot of complexity is just BS. “Complexity tends to be the default option that gets used to persuade investors to buy unnecessary investment products,” Carlson writes, “while the vast majority of people really just need to understand more conventional options to succeed.” When fund companies, media gurus and advisors peddle clever-sounding strategies, they’re creating “an illusion of intelligence and control.”

One of the ways advisors do this is by spinning narratives to make their strategies sound appealing. To illustrate this power, Carlson uses the wonderful example of The Significant Objects Project, in which researchers were able to sell worthless baubles on eBay for surprising amounts because they linked each one with a compelling story. “The problem with narratives is that they often fail as investment ideas,” he writes. “This is because those ideas are usually baked into the price.”

It’s hard to let go of the dream. Carlson quotes Benjamin Graham, who said, “To achieve satisfactory investment results is easier than most people realize; to achieve superior results is harder than it looks.” One of the most difficult obstacles investors face is the nagging feeling that there’s something better out there. Market returns can now be had for less than 10 basis points, and these are almost certainly enough to allow investors to reach any realistic financial goal. Yet we sabotage ourselves by rejecting an easy A-minus and instead wind up with a C or D.  “It’s amazing how easy it is to do worse by trying to do better.”

Ironically, it is often the most hands-on investors who are at greater risk. “In most areas of our lives, trying harder is great advice,” writes Carlson. “But trying harder does not mean doing better in the financial markets. In fact, trying harder is probably one of the easiest ways to achieve below average performance.” He advises that the first step in improving your results is to accept your limitations. “You first have to give up on the dream of superior performance and realize only a small fraction of investors ever actually get there.”

Create a buffer between your portfolio and your emotions. Carlson cites a study that found people ate three times as much chocolate when the treats were right in front of them, compared with when they had to walk a short distance to get one. In the same way, he says, “You have to force yourself to find a way to create that short distance between yourself and your investment decisions.” Maybe that means training yourself not to check your portfolio value every day, or even every week or month.

One of the benefits of using a simple strategy is that it doesn’t require you to constantly check your portfolio. When you do that, decision fatigue can set in quickly, which leads to flagging discipline and poorer choices. If major decisions—such as your asset allocation and your rebalancing threshold—are systematic, you don’t need to constantly agonize over what to do. “Most of the time the answer will be the same: do nothing.”

To underscore the beauty of simplicity, Carlson looks to one of the world’s greatest chefs, featured in the documentary Jiro Dreams of Sushi. According to Jiro’s son, the most sublime sushi is the product of a small number of high-quality ingredients and rigorous discipline. “The techniques we use are no big secret. It really comes down to making an effort and repeating the same thing every day.”