Why Plans Should Come Before Products 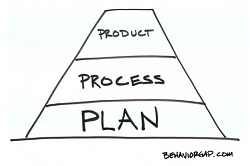 When I wrote the MoneySense Guide to the Perfect Portfolio [now out of print], I waited until Chapter 5 before I started discussing specific ETFs and index funds. That was a deliberate decision, because I feel strongly that we put far too much emphasis on investment products, and too little on the investing process.

Carl Richards agrees. As he explains in his book, The Behavior Gap, selecting investments should come at the end of the planning process, not the beginning: “You would never spend time researching and debating whether to travel by plane, train, or car until you figured out where you are going.”

During our recent interview, Carl elaborated on this idea. “The reason this is so important is that if we start with the product, we are inevitably going to be disappointed. And that leads to buying things high, and selling things low.” Instead, he says, start by giving your investing a context. “For instance, you may think education is really important for your kids and you want to save enough to send all of them to school. So how much will that cost? There are online calculators that can help you figure out you need to save, say, $200 a month for this long. Then you figure out when you will need the money, and how much risk you’re prepared to take. That’s the plan. Then you go and find products or investments to populate that plan. It’s the last step, but we get it all backwards.”

Ironically, even if investors do recognize this, they may view their financial plan as just another type of product, Richards says.  One of the chapters in The Behavior Gap has the provocative title, “Plans Are Worthless,” which might seem surprising in a book by a Certified Financial Planner. But in our interview, Carl explained what he means:

“A lot of times when people think about financial planning, they think about this two-inch-thick book they paid a lot of money for, and then it sat on the shelf and they never looked at it. That’s what I’m talking about when I say plans are useless. We need to get away from this idea of financial planning as an event—or even worse, a product.

“We have to realize that financial planning is nothing more than a series of guesses. We use a more official-sounding word: we call them assumptions. But they’re just guesses, and we’re never going to get them all right: expected rates of return, how much you’re going to make, when you retire, when you’re going to die. You still need to make those assumptions, but let’s get rid of that false sense of precision. And next year, let’s update those guesses. That’s the important part. So financial plans are worthless, but the process of planning is valuable.

“I like to compare it to a cross-country flight. Every pilot I’ve ever flown with has a very detailed flight plan, and they put a lot of time into it. But they will tell you that the moment they leave the ground, that plan is not going to be right. The wind speed is going to be a little bit different, so they’re going to have to make adjustments along the way. And it’s these course corrections that are important, not the flight plan itself.”

Another advisor I know makes a different analogy. He compares a financial plan to a compass rather than a map: it can’t tell you what’s over that next hill or around that next curve, but it can keep you pointed in the right direction.