The most popular source of confusion and misinformation has to be Google Finance. I don’t want to be too hard on Google: the company offers a suite of extraordinarily useful tools for free. But for Canadian investors, Google Finance provides information about ETFs and mutual funds that is highly misleading, and often flat-out wrong. Let’s look at some examples.

The price is right—but it’s only half the story

Google Finance (and other services offering online stock quotes) is useful for charting the changes in an ETF’s price over time. But it does not measure the effect of reinvested dividends and interest. That means you’re only getting half the story: the total return of an investment fund should always be measured assuming all distributions are reinvested.

This can make a dramatic difference when you’re looking at the performance of a fund that pays large distributions. For example, type ZRE into Google Finance and you’ll see the price change in the BMO Equal Weight REITs Index ETF during the 12 months ending April 30 was just over 5%: 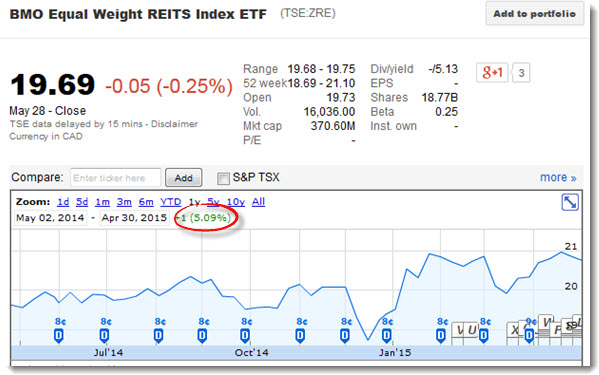 The chart above shows the monthly distributions of $0.08 each, but these are not factored into the performance of the fund. Had you reinvested each of those distributions, the total return on the ETF over that same 12-month period would have been 10.64%. But that figure appears nowhere on Google Finance.

So where should you go for accurate information about the performance of an ETF or index mutual fund? The most reliable source is the fund provider’s website. BMO, iShares, Vanguard and all other ETF providers publish each fund’s total return for the previous year (updated monthly), as well as annualized returns for longer periods. The sites also give the return of the fund’s benchmark, so you can measure its tracking error. Here’s what the report looks like for ZRE:

Another useful source for ETF and mutual fund returns is Morningstar. This service is updated daily rather than monthly, so if you want to know the year-to-date total return on ZRE as of May 28, you can enter the ticker, click the Performance tab, and scroll down to the chart labeled Trailing Total Returns: 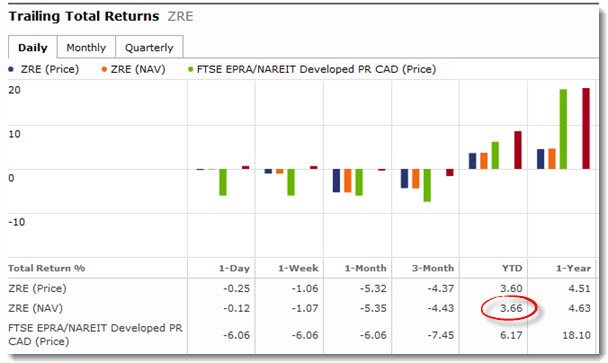 Not good with names—or numbers

You can also ignore most of the other fund metrics reported on Google Finance, such as yield and beta. Heck, even the fund names may be inaccurate: type in the ticker CRQ and you’ll find it’s attached to the Claymore Canadian Fundamental Index ETF, which became the iShares Canadian Fundamental Index ETF when BlackRock bought Claymore more than three years ago. As for the yield on CRQ, Google Finance lists it as 0.69%, while the iShares website gives the 12 month trailing yield as 2.23%.

If you need more evidence, consider that beta is a measure of a fund’s correlation with the broad market: a beta of 1 indicates the fund tends to move in the same direction and to the same degree as the overall market. By definition, then, a Canadian equity fund that tracks the S&P/TSX Composite Index (the most popular benchmark for our stock market) should have a beta of almost exactly 1. Yet Google Finance gives a beta of 0.56 for several index funds pegged to this benchmark. My guess is that because Google Finance is an American service it measures the correlation of funds to the broad US equity market. That makes the beta figure meaningless.

Not all of the issues with Google Finance stem from inaccuracy: sometimes the problem is that Canadian investors misinterpret the data.

If you look up an ETF on Google Finance, the prices are quoted in their native currency: Canadian dollars for funds listed on the TSX, and US dollars for those listed on the New York exchanges. This is a source of confusion for investors who are comparing the performance of Vanguard and iShares ETFs that have both Canadian and US versions.

Say, for example, you’re considering using the Vanguard U.S. Total Market (VUN), a Canadian ETF that holds US equities. This fund’s underlying holding is the Vanguard Total Stock Market ETF (VTI), a US-listed fund. You would expect the return of these two funds to be almost identical. However, if you enter both tickers into Google Finance, here’s the result you would get over the last 12 months:

How could VUN have outperformed by more than 16 percentage points? It didn’t. The confusion here arises because VUN’s returns are reported in Canadian dollars, while VTI’s returns are reported in US dollars. Because of the dramatic surge in the US dollar relative to the loonie, a Canadian investor who held VTI and measured her returns in Canadian dollars would have enjoyed a gain close to 28%, virtually the same as an investor holding VUN.

It’s always important to do your research before making important investment decisions. But you need to make sure you’re relying on accurate data, and that you know how to interpret that data. Ignoring services like Google Finance is a good start.