An Interview with John De Goey

On Monday, the UK implemented new rules banning embedded commissions on investment products. We’re still many years away from that in Canada, but it’s not for lack of effort on the part of John De Goey. For a decade now, the associate portfolio manager at Burgeonvest Bick Securities in Toronto has been a thorn in the side of the industry. Like almost all his contemporaries, De Goey started out selling mutual funds with deferred sales charges, but later become one of the early adopters of the fee-based, no-commission business model.

I chatted with John about his recently published book, The Professional Advisor III: Putting Transparency and Integrity First, a passionate plea for changes to the advice industry. Here’s an excerpt from our interview. 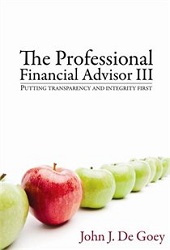 The first two editions of your book were published back in 2003 and 2006. A lot has changed in the investment industry since then.

JDG: When I wrote the first two editions, I knew more people in the advisor media—Advisor’s Edge, Advisor’s Edge Report, Investment Executive—and they were the ones writing about the book. So all I managed to do was piss off other advisors, and consumers didn’t hear the message. Now I am getting more interest from the Globe, the Financial Post, and people like you and Preet Banerjee, who are reaching ordinary investors. And the good news is, today they get it.

When I started in the business in 1993 the media were talking about the importance of cost, but in those days it was more like, “You can save money by investing with a company like Mawer or Beutel Goodman.” It was about low-cost actively managed funds that didn’t pay trailing commissions. When ETFs came along a little over a decade ago, they changed the game: advisors like me loved them because they allowed me to build portfolios using building blocks that were cheap, pure, broadly diversified and tax-effective. But when I first started talking about unbundling products and charging an asset-based fee in 2003, it was heretical. Today it’s mainstream.

I enjoyed the section where you talk about the deficiencies in the way advisors are educated. When I took the Canadian Securities Course, I too was amazed to find indexing gets only a few paragraphs. Is it any wonder so few advisors advocate passive strategies? Do they even know about the evidence?

JDG: The reason there’s so little discussion about passive strategies is that the industry has grown up with a culture of sales. The presumption, which is pretty much unsubstantiated, is that you can beat the market and therefore you should try to beat the market by using active products and strategies. As soon as you start from that premise, you’re going presumptively down one path, which is what I say about the Canadian Securities Institute textbooks. They teach people that active management is sensible management. But that’s putting the cart before the horse. You should stop and ask what the options are and what works—not only on an absolute basis, but on a balance of probabilities. Because neither option is unequivocally, 100% better all the time.

A lot of firms and advisors are advocating core and explore—even ETF providers themselves. Do you think adding an actively managed satellite component can ever add value?

JDG: I’m personally doubtful. Can it ever add value? I suppose there may be one or two instances. Can you ever win the lottery? Yes you can, but does that mean I’m going to run out and buy a ticket today? Just because it’s possible doesn’t mean it’s probable. And the next logical step is to conclude that because it’s not probable, it’s not advisable. For some people it might work, but I still believe whenever one pursues an active strategy, whether it is for 100% of their money or for a 10%, 20% or 30% satellite portion of their portfolio, the most likely reason for any outperformance is likely to be luck rather than skill.

You mention in the book that one of the reasons you gave up your column on Advisor.ca was you couldn’t get your compliance department to let you compare active management to gambling. What happened there?

JDG: Daniel Kahneman in his book Thinking Fast and Slow uses that exact same metaphor. Well, if it’s an unfair comparison, it ought to be unfair no matter who is making it. Yet a Nobel laureate can make it, because he doesn’t have a license, but an ordinary guy like me can’t make the comparison because I have a license and I’m regulated. It isn’t just my firm. At any firm they’re scared of regulators saying it’s detrimental to the public interest, and it’s portraying the industry in a negative light. I don’t think that’s the case: I think it is a full-truth, plain disclosure of material considerations.

The example I use is the packaging on cigarettes. That is now prescribed by law because the evidence is very clear there’s a linkage between cigarette smoke and cancer. Just because there might be exceptions—people who smoke all their lives and don’t get cancer, and people who never smoked and do get cancer—that doesn’t prove the linkage does not exist. It’s just a balance of probabilities. I’m not going to say you can’t frequent the casino or buy a lottery ticket. I’m just saying you need to understand the odds are against you. The same logic holds when pursuing active strategies: you might do better, but the odds are you will do worse.