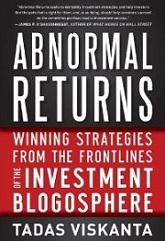 Tadas Viskanta’s blog, Abnormal Returns, has gained a large and prestigious following during its seven-plus years. His new book of the same name also deserves a wide readership. Abnormal Returns (McGraw Hill, 2012) is not so much an argument for a specific strategy as a catalogue of wisdom. “This book should be read more as an exploration of a series of investment topics as opposed to some sort of doctrinaire investment philosophy,” Viskanta writes.

In his chapter on equity investing, he discusses the surprising relationship between the stock market and the economy. From listening to the news, it’s easy to infer that a weak economy produces poor market returns, but the last three years have shown it’s not that simple. The US, he writes, “continues to operate with generally tepid economic growth, headline unemployment rates well in excess of 9%, and a budget deficit well in excess of a trillion dollars,” yet the S&P 500 has more than doubled since 2009. The lesson is that weak economies are a bit like value stocks, while the burgeoning emerging markets are closer to growth stocks. For the patient investor, it is value that outperforms.

Viskanta’s chapter on global investing includes a compelling case for international diversification. He points out that investing outside one’s own country is a long-term hedge: “We aren’t talking about the zigs and zags of the current global economy. Rather we are talking about the big, secular shifts that occur over decades.” Citing this paper, he argues global investing has very little short-term benefit, and indeed, during market turmoil correlations are so high that international exposure offers little protection. However, “the risk for investors is that they are concentrated in a country that has exhibited, or is going to exhibit, relatively poor economic performance over a long period of time.” He’s appealing to US investors, many of whom assume their country’s economic superiority will last indefinitely, but the Japanese would back him up. And let’s face it—many Canadian investors are similarly smug and should also heed this warning.

In his discussion of behaviors and biases, Viskanta points out a little-discussed downside to financial literacy education. Here he quotes the controversial scholar Lauren E. Willis, who writes: “In reality, this education may do no more than increase overoptimism and the illusion of being able to control financial risks.” Indeed, when it comes to assessing our own investing knowledge, most of us are overconfident and reluctant to seek help. Part of the reason, of course, is that the financial industry is swarming with sharks. But I was surprised to read about a study that found the vast majority of investors declined investment advice even when it was free and unbiased, and most of those who did accept the offer ignored the advice. “No matter the circumstances,” Viskanta writes, “we all need some strategy or structure to help buffer our portfolios from our worst instincts.”

If there’s an overriding theme in the book it’s that most investors should strive for simplicity: “Some will argue that a regularly rebalanced, well-diversified portfolio managed with risk, low costs, and taxes in mind is a suboptimal strategy,” he says in the book’s conclusion. “They will point to research showing a particular strategy that outperforms what amounts to a simple, boring portfolio. They will be right in the strictest sense. The greatest challenge for investors isn’t putting together a strategy; it is putting together a strategy that they can follow over time.”