When Bond Yields Throw You a Curve

In my previous post, I explained the flaw in the conventional advice about shifting to short-term bonds if you expect interest rates to rise. While it’s true that bond prices fall when yields go up (that’s math, not forecasting), there are many different interest rates, and they don’t move in lockstep. The rate on your mortgage might go up while the yield on long-term bonds may not budge. And as we’ve seen during the last year, the Bank of Canada’s key policy rate (the overnight rate) can rise significantly while bond yields may tick up only gradually—or even decline.

The easiest way to visualize this idea is with a yield curve. A yield curve is a line on a graph that plots interest rates (on the vertical axis) for bonds of various maturities (the horizontal axis).

In most environments, long-term interest rates are higher than short-term rates, which makes intuitive sense: if you’re going to lock in your money for a longer period and accept more uncertainty, you expect to be compensated with a higher yield. That means in a normal world the yield curve slopes upward from left to right.

The world is flat

However, since then short-term rates have risen significantly, while the yields on longer maturities have inched up much more modestly: the spread between two- and 10-year yields on July 17 of this year had shrivelled to just 16 basis points. Moreover, the yield on long-term bonds (the Bank of Canada’s benchmark has a 30-year term) actually fell to 2.17% from 2.25% a year ago.

As a result the yield curve is much flatter today than it was last July: 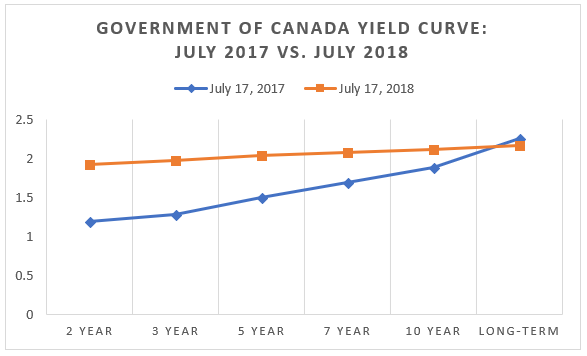 The Year of the Flattening Yield Curve offers a lesson for bond investors. As I’ve written about before, you can estimate a bond fund’s volatility by looking at its duration. This figure (which you can usually find on a bond ETF’s web page) is an estimate of how much its price will change in response to shifting interest rates.

For example, the iShares Core Canadian Universe Bond Index ETF (XBB) has a duration of 7.6, which implies that if interest rates were to rise by one percentage point, the fund would fall in price by about 7.6%. On the other hand, if rates fall by one percentage point, one would expect the ETF to rise in price by about the same amount. Short-term bond ETFs have a lower duration, and are therefore likely to see much narrower swings in value.

This all makes for a tidy theory, but in practice duration only describes what would happen if all interest rates move up or down by roughly the same amount—what’s called a parallel shift in the yield curve. In other words, the yields on two-year, five-year, 10-year and 20-year bonds would all need to rise by 100 basis points for a fund like XBB to see a decline in the neighbourhood of 7.6%. There are certainly periods when rates all move by a similar degree, but this is rare. More often the yield curve steepens, flattens or even bends as interest rates change.

What this means is duration doesn’t have much predictive power when it comes to diversified bond funds that hold a mix of maturities. It would have been easy for a bond investor to think, “During the last year, the Bank of Canada increased rates by a full percentage point, so my bond fund should have been clobbered.” Yet for the 12 months ending July 17, XBB didn’t decline at all: it delivered a modestly positive return of 1.82% because all of those rate increases came at the short end of the yield curve.

Once you understand how the yield curve works, you can try to get clever: with a flat yield curve like we have today, you might decide to keep your bonds (or GICs) very short, since the additional yield on longer maturities may not seem worth it. But if there’s one thing we should understand by now it’s that repositioning your portfolio based on forecasts is often disastrous. Making a tactical move like this—an implicit bet that long-term rates will rise and restore a more normal yield curve—is just a guess, and it can easily backfire.

If you’re more than a decade away from drawing down your portfolio, sticking to a broad-based bond ETF (which holds all maturities) or building a traditional five-year GIC ladder is probably still your best strategy. We know the yield curve evolves over time, but we can’t predict the shape of things to come.