Last week I offered some tips for investors who are tracking their adjusted cost base with Vanguard ETFs. In this post I’ll offer similar advice for those who use BMO exchange-traded funds. These tips expand on As Easy as ACB, a paper co-authored with Justin Bender, which thoroughly explains how to calculate the adjusted cost base of your ETF holdings.

The BMO Equal Weight REITs (ZRE), which is the real estate component the Complete Couch Potato portfolio, provides our first example. You can start by downloading the BMO ETF 2013 Tax Parameters, which gives a summary of all distributions for the year. Scan the list until you find ZRE.

Notice ZRE reported both return of capital (ROC) and capital gains in 2013. ROC is normally paid in cash, and although it appears in Box 42 of your T3 slip, it’s not taxable in the year it’s received. However, it lowers your adjusted cost base and therefore increases your future tax liability.

Capital gains are taxable in the current year (they’ll appear in Box 21). However, most ETFs reinvest capital gains rather than distributing them in cash, and all non-cash distributions increase your ACB and therefore lower your tax liability when you eventually sell shares. But when you visit the ZRE website and click the Distribution tag, you’ll see that ZRE reported no reinvested distributions for the year:

To confirm this, however, you need to visit CDS Innovations (see our white paper for full instructions) and download the spreadsheet with the complete tax breakdown for ZRE. The spreadsheet has a column for each of the ETF’s monthly distributions of $0.081 per unit, and they were indeed all in cash. As suggested on the BMO website, there were no non-cash distributions:

The point here is that investors may assume capital gains distributions are always reinvested, but here’s an example where that’s not the case. Even though ZRE reported capital gains last year, they were all paid out in cash, so they do not increase your cost base.

The CDS spreadsheet will also help you determine how much return of capital was distributed so you can lower your ACB accordingly. In the screen shot above, the amount of ROC is shown in the bottom row of numbers as 25.1536 per month. This raises another important idea that applies to all BMO ETFs. These are not dollar amounts, like they usually are on CDS spreadsheets. For some reason, BMO reports its tax breakdowns as percentages.

In other words, the return of capital component of each distribution is not $25.1536 per share: it’s 25.1536% of each $0.081 cash distribution, which works out to $0.02037 per share. Similarly, about 43.1% of the cash distribution was capital gains, about 2% was eligible dividends, and 29.6% was fully taxable “other income.” (Do the math and you’ll find these numbers all match up with the annual summary reported in the BMO ETF 2013 Tax Parameters document.)

Remember, the capital gain, the dividends and the other income don’t affect your ACB: you only need to adjust for the return of capital. So if you held the same number of shares for the entire year, you should reduce your cost base by $0.244493 per unit ($0.02037 per share times 12 months). If your number of shares varied during the year, then you need to consider each individual distribution and adjust accordingly.

Return of capital that wasn’t returned

The BMO S&P/TSX Capped Composite (ZCN) provides our next case study, which comes courtesy of Matt, a reader who noticed it had a very unusual non-cash distribution in 2013. It turns out that return of capital is not always paid out in cash.

By visiting the website for ZCN and clicking the Distribution tab, Matt could also see the ETF had reinvested distributions of more than $0.07 per share:

When Matt visited CDS Innovations and downloaded the detailed tax breakdown for ZCN, he found there were five distributions for 2013. The first four were the regularly scheduled dividends, and the fifth was a non-cash distribution that matches up with the number reported on the website ($0.07319 per share): 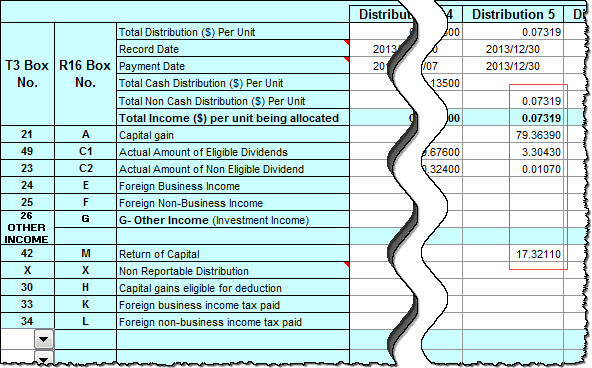 These two BMO ETFs provide another reminder not to rely only on the distribution information reported by ETF websites. You always need to get the detailed spreadsheet from CDS Innovations so you can accurately adjust the cost base of your holdings.