The mutual fund industry loves to sell past performance, and it’s not above massaging the data to make that performance look even better. But every now and then an advertisement appears that sets the bar even lower. Michael Callahan, a financial planner in Ottawa, recently sent me an ad for IA Clarington Investments that might be the worst one I’ve seen yet. “I figured you might welcome an opportunity to rip this one to shreds,” he wrote. Challenge accepted. 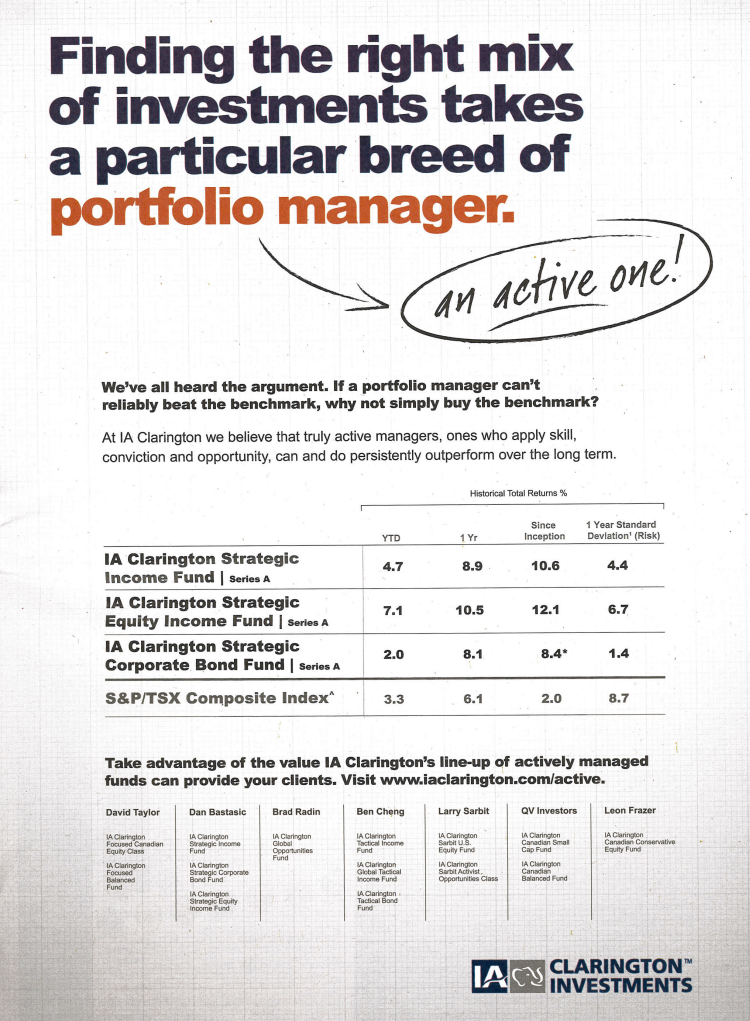 First there’s the time frame. The ad says the company believes active managers “can and do persistently outperform over the long-term.” But as explained in the fine print (microscope not provided), the year-to-date returns in the first column of the table are for the period ending March 31, so we’re talking about three months. We get 12-month returns in the second column, and the third column gives the funds’ returns since their inception. Problem is, the three funds spotlighted here were launched in the late summer of 2011, so they had been around for all of 18 to 19 months when these returns were calculated. That might be long-term if you’re an insect, but for the rest of us, it’s an utterly meaningless time frame for assessing investment returns.

But we’re just getting started. The funds’ returns are compared against the S&P/TSX Composite Index, the traditional benchmark for Canadian equity funds. But none of the funds in the ad fall into that category. The IA Clarington Strategic Equity Income Fund comes closest with 63% of its holdings in Canadian stocks, but it also includes 21% US stocks. The IA Clarington Strategic Income Fund is 38% Canadian equities, 14% US equities and 32% fixed income. Meanwhile, the IA Clarington Corporate Bond Fund includes precisely zero Canadian equities: it’s a high-yield bond fund. (The fine print does state that the benchmark index contains no fixed income, but acknowledging that doesn’t make the comparison any less worthless.)

So here’s an ad arguing that skilled active managers can outperform their benchmark over the long term, and the “evidence” covers an absurdly short period and uses an entirely inappropriate benchmark. It’s like they weren’t even trying.

What makes the ad even more outrageous is it appeared in an industry publication, so its target audience is advisors. We’re used to the fund industry being contemptuous of retail investors, but one would hope even the dimmest advisor would see through such obviously fatuous claims.

What the evidence really shows

Let’s consider IA Clarington’s claims using more meaningful data. Since we’re looking for long-term outperformance compared with the S&P/TSX Composite Index, we’ll go out a wee bit further than 19 months and we’ll consider funds that actually hold Canadian stocks. The IA Clarington website lists four that can be meaningfully compared to a broad-market index (89% to 98% of their holdings are Canadian equities), and all of them have a track record of at least 10 years.

Here’s what the returns of those funds look like compared with the iShares S&P/TSX Capped Composite (XIC). Market-beating returns appear in green.

Interesting how the story changes when you actually make a fair comparison. It might be true that active managers “who apply skill, conviction opportunity can and do persistently outperform over the long term.” Unfortunately there is no evidence of this in any of IA Clarington’s Canadian equity funds.

“We’ve all heard the argument,” says the first line in the ad. “If a portfolio manager can’t reliably beat the benchmark, why not simply buy the benchmark?” Why not indeed.