What Would Buffett Do? 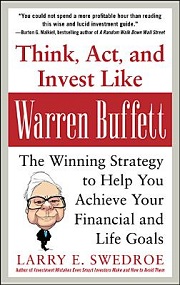 When I set out to educate myself about investing, Larry Swedroe was one of the most influential authors I encountered. What I loved about his books (including The Only Guide to a Winning Investment Strategy You’ll Ever Need and, more recently, The Quest for Alpha) was that every argument was backed up by academic research.

So I was surprised to see his latest book, Think, Act, and Invest Like Warren Buffett, is a slim volume with only a few scattered footnotes. And knowing Swedroe’s passion for passive investing, I wondered why his title invoked the world’s greatest stock picker. I recently had the pleasure of speaking with Larry Swedroe via Skype, and he shared the backstory:

“I’ve learned over the years that relatively few people are interested in the evidence and the data. Maybe 10% of the audience wants that stuff: engineers love my other books, and they wouldn’t like this one. Then there are those you might call investment geeks who want all the research, and they will even read the original papers. But for the vast majority it’s, ‘Just tell me the answer, and I don’t want to know the research behind it.’ They won’t read a 300-page book.

“A little more than a year ago I was with a prospect who was worried about the markets and had gone to cash. I was trying to point out all the evidence and logic about why you shouldn’t use active managers, and it just wasn’t getting through. There was a politician who once said, ‘Don’t confuse me with the facts; I’ve got a closed mind.’ So I realized this was a pointless discussion, and often what I’ve done in these situations is just say we’re not the right firm for you.

“But then I thought, maybe it’s my problem. Maybe there is a better way to convince him if it can’t be with evidence. So I said, ‘Forget what I think, and forget what the research says. Let’s just set that aside.’ I asked him who he thought was the greatest investor of our generation. I knew if you ask 100 people that question, 99 of them are going to say Warren Buffett. And of course, he did too.

“So I said, ‘If you don’t want to take my advice, and you don’t want to look at the evidence, do you think it would be intelligent to follow Buffett’s advice?’ And the guy said yes. Then we looked at three key issues to see what Buffett has to say.”

Swedroe is quick to acknowledge that almost no one can actually invest like Buffett. “You can’t buy whole companies, you can’t get on their board, you can’t strike a special deal with Goldman Sachs because you can’t write a $5 billion cheque.” Indeed, the Oracle himself has long been discouraging others from trying to imitate him. So Swedroe started by pointing out that since the 1990s Buffett has encouraged the average investor to simply buy the market. “Basically he says, ‘If you look in the mirror and you don’t see me, you should invest in index funds.’”

Then Swedroe asked his prospective client to consider Buffett’s opinion of market gurus. “This guy was citing all kinds of forecasts and newspaper articles. I told him Buffett says you should ignore all forecasts because they don’t tell you anything about where the markets are going, but they do tell you a lot about the person making the forecast.”

The message finally seemed to get through the jittery investor, and Swedroe had found the hook for his next book. I’ll share more from our interview later in the week.