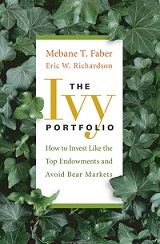 In recent years, the so-called Yale Model has been extremely popular with investors. The model is an attempt to mimic the investment strategy used by Ivy League endowment funds, which have an outstanding track record of beating the market indexes. David Swensen, the superstar manager of the Yale endowment fund, delivered returns of 10.1% annually from 2002 to 2011, a decade when stocks returned 3.9%. The Harvard endowment returned 9.4% over the same period and has grown 12.9% annually over the last 20 years.

The Ivy Portfolio, by Mebane Faber and Eric Richardson, describes how Yale and Harvard use an asset allocation model that is broadly similar the Couch Potato strategy. The key difference, however, is that the endowments include a number of asset classes that are not available to retail investors, including private equity, hedge funds, and direct ownership of timber resources and commercial real estate.

The first half of Faber and Richardson’s book is a fascinating look at how individual investors can mimic the Yale Model. The authors quote both Swensen and Jack Meyer (Harvard’s former endowment fund manager), both of whom recommend building diversified portfolios with low-cost index funds. Then they offer three possible “Ivy Portfolios” that anyone can assemble with ETFs: the simplest one allocates 20% each to US stocks, foreign stocks, government bonds, real estate and commodities. Two other chapters explain that private equity and hedge funds can be profitable for institutional investors, but are best ignored by the great unwashed.

It’s all in the timing

So far, so good—but the latter half of The Ivy Portfolio goes a giant step further. Rather than simply encouraging investors to diversify widely and rebalance, Faber explains his strategy for protecting oneself from dramatic drawdowns, or “winning by not losing.” He points out that four of the five asset classes in the Ivy Portfolio have experienced declines of about 50% or more since 1973. (Government bonds were the only exception.) “So, is there a way to avoid these long bear markets and losses?” he asks.

The suggestion Faber offers in the book is based on his paper A Quantitative Approach to Tactical Asset Allocation, first published in 2007 and updated in 2009. It’s still the most downloaded paper on the Social Sciences Research Network, which testifies to its extraordinary popularity.

Faber’s strategy is actually very simple. You just check the price of each asset class on the last day of each month, and if it is greater than its 10-month simple moving average (SMA), you buy (or continue to hold). If the price is less than the 10-month SMA, you sell and move to cash. In other words, it’s straightforward market timing.

If one had employed this timing strategy with U.S. stocks from 1900 through 2008, Faber reports, it would have delivered returns of 10.45%, compared with 9.21% for the S&P 500. More remarkable, it would have protected you from almost all the worst drawdowns: it even earned slightly positive returns in 1931 and 2008, when the market lost 44% and 37%, respectively. Faber’s analysis shows similar results when applied to international stocks, real estate, commodities and even 10-year government bonds. In all cases, the timing strategy produced higher returns with much lower volatility, while avoiding the largest drawdowns.

Backtested from 1973 through 2008, the the Ivy Portfolio with the market timing strategy trounced a buy-and-hold approach and delivered returns that would have made Swensen and Meyer smile:

These are very impressive results, especially when you consider that they came about with an average of just three to four round-trip trades per year.

The Ivy Portfolio is an excellent book that I would highly recommend to index investors (though I would discourage them from building a portfolio that is 40% real estate and commodities). But how about Faber’s timing strategy? Is it a recipe for lowering the volatility and improving the long-term returns on a Couch Potato portfolio? I’ll consider that question in my next post.