Can Your Funds Outperform Over a Lifetime? 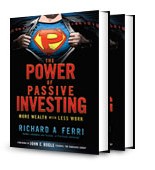 Advocates of active management admit that only a minority of mutual funds will outperform their benchmarks, but they argue there is still a significant probability of success. According to the data Rick Ferri provides in his new book, The Power of Passive Investing

(Wiley, 2010), the odds of an actively managed fund beating an index fund are as high as 42% in any given year, and about 30% over five years. Surely by zeroing in on funds with good track records and low costs you can give yourself a decent chance of building an index-beating portfolio. Right?

Ferri takes this argument apart with simple math. The key point here is that almost no one builds a portfolio with a single mutual fund. It’s far more common to select several funds in various asset classes. But here’s the rub: to determine the odds that the entire portfolio will beat its benchmark, you need to combine the probabilities that each individual fund will outperform.

Here’s a simplified example. Since the probability of flipping heads is one in two, you’ll flip two heads in a row one time in four (2 × 2), and three in a row just one time in eight (2 × 2 × 2). The same principle is at work when you select mutual funds in a diversified portfolio. What are the chances you will pick multiple winners?

Not zero — but close

To test this idea, Ferri took the performance data of actual mutual funds and programmed a computer to create thousands of portfolios using three, five, and 10 active funds. Then he compared these with portfolios of index funds in the same asset classes.

When he went out 10 years, the odds were reduced even further. A trivial 0.8% of the portfolios outperformed the index funds by more than 0.5%, while 70% underperformed by at least that much.

Of course, most people have a horizon much longer than 10 years. And as Ferri’s model demonstrates, over a typical investor’s lifetime, the probability that an actively managed mutual fund portfolio will outperform index funds is vanishingly small.

So it’s simply not true to say that actively managed funds have no chance of earning higher returns than index funds over the long term. The probability is not zero — it’s just statistically indistinguishable from zero.

Coming up next: I’ll be posting excerpts from an interview I did with Rick Ferri about his book.