What Investors Can Learn From Entrepreneurs 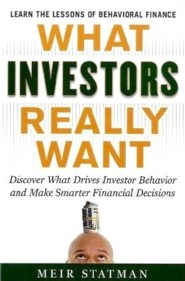 This post is the last in a series in which I share some insights from my recent interview with Meir Statman, one of the world’s leading scholars of behavioural finance. At the end of the post, I’ll tell you how you can win a copy of Prof. Statmans’s fascinating new book, What Investors Really Want.

It’s natural for human beings to be overly confident in our own abilities. You’ve probably heard about the famous famous study in which about four out of five people rated their own driving skill as above average.

This tendency to overrate our own skill is sometimes called the Lake Wobegon Effect, after radio personality Garrison Keillor’s fictional town where “all the women are strong, all the men are good-looking and all the children are above average.”

You can imagine that 100% of active fund managers are convinced that they can outperform the market. But this is impossible, since every invested dollar that beats the market must be balanced by another dollar that lags by an equal amount.

The idiot on the other side of the trade

Prof. Statman uses a fresh analogy to explain our overconfidence as investors. He compares active investors to tennis players who think they are hitting the ball against a practice wall, when in fact they are playing against another player who may be more skilled. He goes on to say that entrepreneurs do not make this same mistake. I asked him to elaborate:

“Investors generally don’t think about this simple question: ‘If I am buying a stock because I think it is going to go up, who is the idiot who is selling it to me?’ They don’t think about investing like playing tennis against a possibly more skilled opponent. They ignore the likelihood that the person on the other side has some inside information, or a computer program that enables them to take advantage of an opportunity. They don’t realize that they might in fact be that opportunity, and that someone else’s gain may come at their expense.

“There is another analogy that I make, which is that if I go to the supermarket and tuna is on sale for $1 and it usually costs $2, I’m going to stock up. If the store runs out of tuna, I can always get a rain check that guarantees me that lower price. That’s a real sale. What investors don’t get is that when the guy on television says this stock is a bargain, other people hear that, too. And by the time you get to the market, it might not be a bargain anymore, even if the person on TV was right at the time.

“Entrepreneurs are different, because they are keenly aware that they are in competition against players on the other side of the net. If they are not aware of their competition they’re going to be in trouble very quickly. So they constantly ask themselves, ‘Is somebody selling the same product at a lower price?’ or ‘Is somebody selling a better product at the same price?’ or ‘Is somebody introducing a new product that is going to kill mine?’ In this sense, they know they are playing tennis against a real opponent.”

I would argue that Couch Potatoes, unlike active investors, are closer to the tennis player who is hitting the ball against the practice wall. Unless they are actively trying to time the market, investors who buy broad-based index funds aren’t doing so because they think they’re outsmarting an idiot on the other side of the trade. They’re simply making the decision to accept market risk with the expectation that they will be rewarded over the long-term.

Win a copy of What Investors Really Want

Now it’s time to give away a couple of copies of Prof. Statman’s book, What Investors Really Want. I’ll draw two names at random from all of the entries I receive before Friday, January 14, at 11:59 pm EST. There are two ways to enter:

Good luck to all entrants. Winners will be announced on Monday, January 17.