What Is the Advisor’s Role? 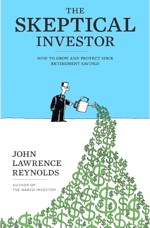 John Lawrence Reynolds’ newest book, The Skeptical Investor, argues that Canadians were badly served by their advisors during the crash of 2008–09. The book has all the wit and outrage of his previous screed, The Naked Investor, which is a favourite of mine. In some of his best lines, he describes money market funds as “a place to waste your money by paying other people to put it in treasury bills,” and says that buying bonds from a broker is “like shopping blindfolded in a foreign flea market where you don’t speak the language.” There’s even a cameo appearance by Preet Banerjee, creator of WhereDoesAllMyMoneyGo.com. So far, so good.

But I admit to being irked by the very first sentence of the book, which quotes a frustrated investor named Suzanne: “It seems to me that a financial advisor should be as good at telling you when to get out of the market as telling you when to get in.” Suzanne explains that in 2001 she poured half her retirement savings into just two stocks, both banks. The stocks soared until 2008, when she says she wanted to take some profits. Her advisor suggested she hold on—and we know what happened next. The implication is clear: my advisor made me lose money.

Reynolds goes on to muse wistfully about what would have happened if she had spent those years in safe government bonds, “which would have earned 5.5% annually.” I think I know what would have happened: during the long bull market of 2003–06, Suzanne would have been complaining to her advisor that her crappy bonds were earning 5.5% while Canadian equities were shooting out the lights with 27%, 15%, 24% and 17% returns in those four years.

I never thought I would be defending advisors, but it’s just so convenient for investors to play woulda-shoulda-coulda. Suzanne could have insisted that her advisor take some of her profits and put them in bonds, but she didn’t. He resisted, so it’s his fault she lost money. This subtext pervades the book: that advisors should have seen the crash coming, or at least should have had their clients in more conservative investments.

I thought back to this idea when Kate, the subject of my previous post, asked when it made sense to use an advisor. So I’d like to open that question up to readers. What should you expect from an advisor? Are you like Suzanne, who expects her advisor to time the market, or take the blame when things go wrong? Like Reynolds, do you feel that the advisor’s main role is to help the client understand risk? Many advisors I know say one of their most important tasks is calming their clients’ euphoria during good times and holding their hands during bad times.