Last October, Justin Bender wrote a blog post explaining why GICs are more tax-efficient than bonds. The blog caught the attention of John Heinzl of The Globe and Mail, who wrote his own article on the topic a month later. Many investors are still surprised and confused by this idea, however, so I thought it was time to take another look.

It’s true that bonds and GICs are taxed in the same way. If you buy a newly issued bond with a face value of $1,000 and a coupon of 4%, you’ll receive $40 in interest each year, and this amount is fully taxable at your marginal rate. If you buy a $1,000 GIC yielding 4%, the situation would be identical. Nothing complicated so far.

However, in practice, things aren’t that simple. Interest rates have been trending down for years, and bonds issued when rates were higher now trade at a premium. Let’s use an example to explain this concept. Twelve months ago you bought a five-year bond with a face value of $1,000 and a coupon of 4%. Since then interest rates have fallen one percentage point. That means your bond now has four years left to maturity and is still paying $40 in interest, while new four-year bonds are paying just 3%, or $30. If another investor was in the market for a four-year bond today, which one would he want?

The answer is obvious: he’d want the bond paying more interest. But we know there’s no free lunch. The bond with the 4% coupon will now sell for a premium: it would be valued at approximately $1,036. (I’m simplifying the math here, because the concept is what’s important.)

Now there’s a trade-off: the buyer of your old bond will receive more interest, but at maturity he’ll collect only the face value of $1,000 and suffer a capital loss of almost $36. If both bonds are held for the full four years, their total return will be the same: in other words, both now have a yield to maturity of 3%:

The upshot is if you’re investing in your RRSP or TFSA, it doesn’t matter whether you buy bonds at a premium, at par, or at a discount. With no taxes to pay, it all comes out in the wash.

If you’re holding fixed income in a non-registered account, however, the situation is quite different. The reason is that interest and capital gains/losses receive different tax treatment. And when you buy a premium bond, a greater share of your total return comes from fully taxable interest. Here’s an example using the same two bonds as above, and assuming the investor’s marginal tax rate is 40%:

If you could subtract the $35.71 loss from the premium bond’s $160 in interest payments, then both bonds would deliver the same after-tax return. But you can’t do that: a capital loss can only be used to offset a capital gain, not to reduce interest income. Capital gains are taxed at only half your marginal rate, so in the above example, the investor who used the loss to offset a gain would save only $7.14 in taxes ($35.71 x 20%). That would bring his total after-tax return to $67.43—still a lot less than the bond purchased at par.

Remember, too, that tax on the interest is payable every year, while the capital loss can only be claimed after it is realized when the bond matures four years down the road.

Par for the course

So what does all this have to do with GICs and bond ETFs? The key point is that GICs never trade at a premium or discount to their face value. Unlike bonds, GICs don’t trade on the secondary market—you can’t buy a five-year GIC today and sell it to someone else at a premium next year if interest rates fall. As with a bond purchased at par and held to maturity, a GIC’s total return is made up entirely of interest, with no capital gains or losses. Its coupon and its yield to maturity are always the same.

Compare that with bond ETFs today: virtually every one is filled with premium bonds. You can see this by visiting the fund’s web page, where you will notice that its coupon is higher than its yield to maturity. In some cases, the difference is dramatic, as with the iShares 1-5 Year Laddered Government Bond (CLF): 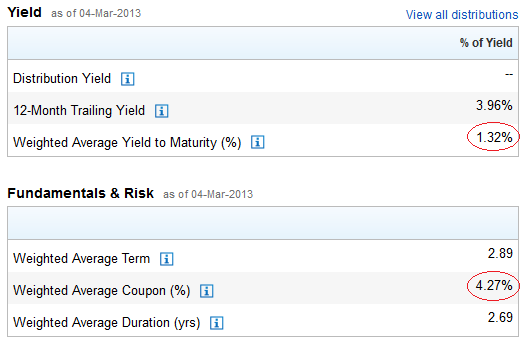 This ETF would be much less tax-efficient than a five-year GIC ladder, because that entire 4.27% coupon (minus fees) is fully taxable, even though the yield to maturity is just 1.32%. What’s more, GICs pay higher yields than government bonds: today you can build a five-year ladder with an average yield over 2%, with no credit risk and no chance of a capital loss.

ETFs do offer more liquidity than GICs, and there’s an opportunity for capital gains if rates fall and you sell the fund after its price has gone up. But if you’re a long-term investor who needs to hold fixed income in a taxable account, GICs are likely to be a better choice.